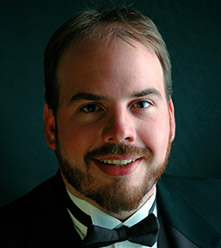 John is has been performing in north and central Illinois for nearly ten years. With Opera Illinois in Peoria he performed Jacob in Moore’s Ballad of Baby Doe. He has also performed Count Almaviva in Le nozze di Figaro and Marcello in La bohème for the St Martin’s Chamber Players productions in Peoria. John has performed several notable roles with the Western Illinois University Opera Workshop, such as Der Sprecher in The Magic Flute, Poobah in Mikado, and the Learned Judge in Trial by Jury. A resident of the Chicago area, he recently performed the baritone solo from Durufle’s Requiem with the St. Charles Singers.