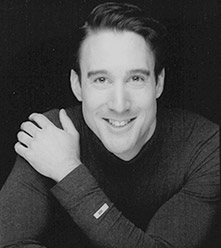 Eric Shaw’s glorious high notes and ease of singing have recently been heard at the Wexford Festival in Ireland as Gaston in Die Drei Pintos by Weber/Mahler. His Italian debut in Bologna followed with his debut in Schubert s Die Freunde Von Salamanca. Recent engagements include the title role in Candide for Genoa and The Seven Deadly Sins by Weill for Calgary Opera. Mr. Shaw has often performed with Utah Opera, taking on such roles as Almaviva in Il barbiere di Siviglia and St. Brioche in The Merry Widow.