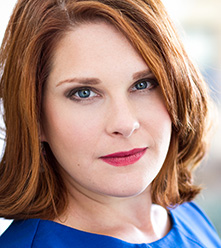 Soprano Jessica Jane Jacobs has been praised by critics for her “warm”, “clear”, and “bejeweled” vocal tone along with her “affecting”, “strong”, and “honest” stage presence.

Ms. Jacobs is becoming noticed for her abilities as a singing actress. Of her performance as Mimì in La Bohème one reviewer wrote, “Jacobs’s ability to respond organically to her cast mates puts her in a growing minority of opera singers who are able to fully integrate dramatic truthfulness with fine vocal delivery.” (The Boston Musical Intelligencer) She has sung leading and supporting roles with many companies in the Northeast, including NEMPAC Opera Project, Boston Opera Collaborative, Lowell House Opera, Harvard Early Music Society, and Calliope Productions.

Ms. Jacobs has spent two summers in Lucca, Italy with the Opera Theater and Music Festival of Lucca, where she performed the roles of Barbarina in Mozart’s Le Nozze di Figaro and Norina in Donizetti’s Don Pasquale. She returned to Italy in the summer of 2010 as a member of “i Solisiti di Spoleto” at CCM Spoleto’s inaugural season, where she performed with full orchestra in the historic Teatro Nuovo. In the summers of 2012 and 2013, Ms. Jacobs sang with Sugar Creek Opera as an Apprentice Artist, singing the roles of Nella in Gianni Schichi and covering the role of Love Simpson in Carlisle Floyd’s Cold Sassy Tree.

Ms. Jacobs has received an encouragement award from the Metropolitan Opera National Council Auditions (Southeast Ohio District 2009). She placed second in the Just Love to Sing! Competition in NH (2012) and has been chosen as a semi-finalist in the Peter Elvins Competition (2012 and 2016) and the Opera Theater Pittsburgh’s 2015 Mildred Miller International Voice Competition. Ms. Jacobs is a graduate of Northwestern University (Bachelor of Music) and the University of Cincinnati College-Conservatory of Music (Masters of Music and Artist Diploma). She currently resides in Boston and studies with Dr. Rebecca Folsom.