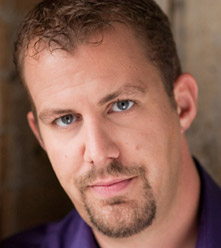 Bass-baritone Kyle Albertson is becoming renowned not only for his versatile voice, confidence, and style, but also for his ability to bring a character to life on stage. Critics have called his baritone voice “youthful, virile, and handsome” and over the last two seasons, Mr. Albertson has set his mark upon the operatic world performing varied roles such as Leporello in Don Giovanni, Lescaut in Manon Lescaut, and Henry Kissinger in Nixon in China. Other noted roles in Mr. Albertson’s repertoire include Blitch in Susannah, Mephistopheles in Faust, Figaro in Le nozze di Figaro, and the Four Villains in Les Contes d’Hoffman.

Upcoming engagements include a return to the Metropolitan Opera to cover the roles of Antonio in Le nozze di Figaro, Masetto in Don Giovanni, and the Jailer in Dialogues des carmélites; the title role in Sweeney Todd with Syracuse Opera; a concert performance with the Santa Fe Opera Association; and Zuniga in Carmen in his Dallas Opera debut.

Last season he joined the Metropolitan Opera roster covering Bretigny in Manon, as well as appeared with the Glimmerglass Opera as Gus O’Neill in John Musto’s Later the Same Evening, Creonte (cover) in Medea, and the role of Eugene O’Neill (cover) in the world premiere of A Blizzard on Marblehead Neck. He also made his debut as Lescaut in Manon Lescaut with Opera Grand Rapids, his debut with Austin Lyric Opera as Monterone in Rigoletto, and sang Leporello in Don Giovanni with Opera on the James. Kyle also enjoys a strong relationship with Chicago Opera Theater, having performed Quince in A Midsummer Night’s Dream and Henry Kissinger in Nixon in China, lauded by the Chicago Sun Times and The Chicago Tribune for his “watchful” and “effective” portrayal.

As an Apprentice Artist at Santa Fe Opera for two summers, he performed Antonio in Le Nozze di Figaro, and covered the roles of Howard Joyce in the world premiere of Paul Moravec’s The Letter, the Four Villains in Les Contes d’Hoffmann, Baron Duphol in La Traviata, and Hercules in Gluck’s Alceste. Mr. Albertson is a graduate of the Resident Artist Program at Minnesota Opera. During his time there, he performed the roles of Count Ribbing in Un Ballo in Maschera, Haly in L’Italiani in Algeri, Capulet in Roméo et Juliette, Lindorf/Dr. Miracle in Les Contes d’Hoffmann, Bartolo in Le nozze di Figaro, Archibald Douglas in Rossini’s La donna del lago, and Nilikantha in Lakmé, a role in which “Kyle Albertson made an imposing Nilakantha, bringing life to a character that is barely two-dimensional.” With the Merola Opera Program, Mr. Albertson sang the role of Geronimo in Cimarosa’s Il matrimonio segreto and as a member of the Aspen Opera Theater Center, Mr. Albertson performed Escamillo in Carmen, Besso in Giasone, Harasta in The Cunning Little Vixen, and Monterone in Rigoletto.