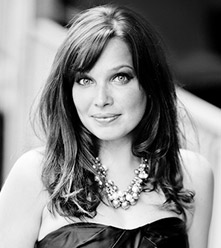 Louise Rogan, mezzo-soprano, is a graduate of the Chicago College of Performing Arts, where she received her Bachelor of Music degree and Professional Diploma in Opera. At CCPA, she sang Pamela in New York Stories, Third Lady in Die Zauberflöte and the title role in the Chicago premiere of Amelia by Daron Hagen. As a Chicago Opera Theater Young Artist, she performed the roles of Second Lady in Die Zauberflöte and Masha in Moscow Cheryomushki. As a Young Artist with Opera Colorado she made her professional debut as Giovanna/Il Paggio in Rigoletto. She was also seen on the mainstage as Mercédès in Carmen. As part of Opera Colorado’s touring productions she performed Stephano/Gertrude in Romeo and Juliet, Rosina in The Barber of Seville, and the title role in the student matinee production of Carmen.