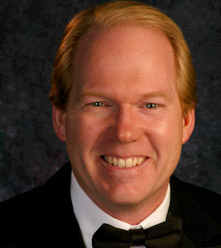 As one of America’s most accomplished tenors, Mark Thomsen enjoys a busy career in the United States and abroad. For the 2002-2003 season, his engagements included performances of Ernesto in Orlando, Tamino in Cleveland, Alfredo in La Traviata in Toledo, Belmonte in Die Entführung in Kansas City and Rodolfo in La bohème in Indianapolis. During the 2001-2002 season, he added two new roles to his repertoire when he sang Lenski in Eugen Oneginwith Indianapolis Opera and Lennie in Of Mice and Men in Edmonton. He also returned to the Dallas Opera as Edgardo in Lucia di Lammermoor and to the New Orleans Opera as Faust. In May 2002 he portrayed Camp Williams in Cold Sassy Tree in Kansas City and The Tenor in Garrison Keillor’sOpera, Opera! with the St. Paul Chamber Orchestra. In summer 2002 he was heard as Ernesto in Don Pasquale at the Crested Butte (Colorado) Festival. Mr. Thomsen has also performed throughout Europe with appearances at Teatro alla Scalla, Vienna Volksoper, Vienna Staatsoper, and Opéra de Nantes.