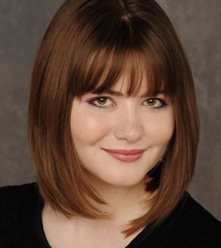 Meaghan Heath, Australian-American mezzo-soprano, is currently a Resident Artist at  Tri-Cities Opera for their 2014-15 Season, performing the roles of Maddalena in Rigolettoi , Zulma in L’Italiana in Algeri, the Waitress in Speed Dating Tonight, and Siebel in Faust.

She made her operatic debut as an Apprentice Artist for the Sarasota Opera’s 2012 Winter Season, and rejoined Sarasota Opera for their 2012 Fall Season where she sang the role of the Page in Rigoletto, as well as covered the roles of Giovanna and Little Nemo in Daron Hagen’s Little Nemo in Slumberland. In 2011, she covered the role of Dorabella for Opera in the Heights’s Cosi fan Tutte, as well as performed at Opera in the Ozarks as Cherubino in Le Nozze di Figaro and Meg in Little Women.

In her hometown of Houston, Texas, she performed with Opera Vista for two years. In 2011, she participated in Opera Vista’s competition for contemporary opera where she premiered an excerpt from Matthew Peterson’s opera Voir Dire; consequently, this excerpt won the competition.