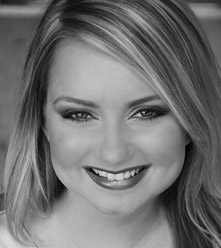 Recently, Ms. Fox performed the role of Olympia in Les contes d’Hoffmann at Indiana University Opera Theater. Ms. Fox’s other roles include Susanna from The Marriage of Figaro, Queen of the Night in The Magic Flute, Gheradino in Gianni Schicchi and Johanna in Sweeney Todd, all at the DePauw Opera Theater, where she received her bachelor’s of music in voice performance. Currently, Ms. Fox is a graduate student in voice at Indiana University where she is pursuing her master’s of music degree in voice performance. She is the Kohlmeier Scholarship winner at Indiana University. She was also a national finalist in the MTNA Vocal Competition and the first place winner in the NATS State Competition in Evansville, Indiana.