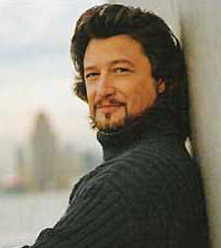 Peter Volpe has appeared to critical and popular acclaim throughout Europe and North America. For six years, he performed in Europe as principal bass in Bremen and Karlsruhe and made guest appearances in Stuttgart, Saarbrücken, Darmstadt, Dortmund, Dusseldorf and Duisburg, Trier, Braunschweig, Strasbough, Colmar, Mulhouse, and Luxembourg. Since his return to America he has appeared with the New York City Opera (title role in Don Giovanni, Sparafucile in Rigoletto and Colline in La Bohème), the Santa Fe Opera (Zúñiga in Carmen), Lyric Opera of Kansas City (Gremin in Eugene Onegin), Opera Company of Philadelphia (Colline, the Speaker in Die Zauberflöte, Alidoro in La Cenerentola). This season, he will sing Sparafucile for the Arizona Opera, Zúñiga for Kentucky Opera, and make a notable debut with the Metropolitan Opera in their new production of War and Peace. Next season, he will return to the New York City Opera to sing the title role in Don Giovanni and Sparafucile and to the Metropolitan Opera for their production of Les Troyens.