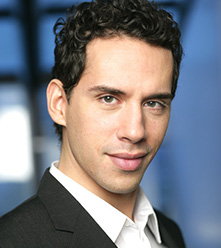 MET Opera National Council Auditions Semi-Finalist, Baritone Ricardo Rivera has been extolled by critics for presenting “sensitive, beautiful, and emotionally powerful” portrayals with “unerring vocal control”. This summer, he will return to the Santa Fe Opera as an second-year apprentice singer where he will perform Moralès and cover Escamillo in Carmen.

In the 2013-2014 season, Ricardo will make role debuts as Marcello in La bohème with the El Paso Opera and as The Father in Hansel and Gretel with the Opera at Florham. He will be performing in the Licia Albanese-Puccini Foundation Gala at Alice Tully Hall with Eve Queler conducting the Opera Orchestra of New York and in a concert at the West Point Academy sponsored by the Gerda Lissner Foundation. He will also perform in the world premieres of Robert Cuckson’s cantata Horace: a portrait as Horace and Andrew McManus’ opera Killing the Goat as General Trujillo. The latter will be performed with Contempo’s resident chamber music ensembles, the GRAMMY-award winning eighth blackbird and Pacifica Quartet.

In the 2012-2013 season, Ricardo’s operatic engagements included performances at the Santa Fe Opera as Thomas Martin and the Hotel Managers in the world premiere of Theodore Morrison’s Oscar and the cover of Germont in La traviata. Other performances included his Alice Tully Hall debut in an Eve Queler and Friends concert, Mathieu in Andrea Chénier in a return to the Opera Orchestra of New York, and role debuts as Sharpless in Madama Butterfly with Opera Company of Middlebury, Ashby in La fanciulla del West with Knoxville Opera, and Corifeo in Jorge Lidermann’s opera Antigona Furiosa with Contempo and members of eighth blackbird.

Other operatic engagements include Orisini in Wagner’s Rienzi with the Opera Orchestra of New York under Maestro Eve Queler in Avery Fisher Hall, Le chat in L‘enfant et les sortilèges and Spinelloccio in Gianni Schicchi under the baton of Lorin Maazel at the Castleton Festival, Moralès in Carmen and Fiorello/L’ufficiale in Il barbiere di Siviglia with Opera North, and Silvio in Pagliacci with the Martha Cardona Theater.

Ricardo is a recent graduate of Mannes College The New School for Music where he performed the title role in Don Giovanni, Ford in Falstaff, Don Alfonso in Così fan tutte, and Aeneas in Dido and Aeneas. At Mannes he was mentored by former MET Opera Conductor and current Music Director at The Glimmerglass Festival, Joseph Colaneri and great American Mezzo-Soprano, the late Regina Resnik.

In addition to twice being an apprentice singer with the Santa Fe Opera, he was an apprentice artist at the Chautauqua Opera where he covered Enrico in Lucia di Lammermoor, performed the Sergeant and covered Lescaut in Manon Lescaut, in addition to performing in two concerts with the Chautauqua Symphony Orchestra. He was also a young artist with Opera North where he sang Moralès in Carmen and Fiorello/L’ufficiale in Il barbiere di Siviglia and was an Eva and Marc Stern Fellow at SongFest where he coached with Martin Katz, Graham Johnson, and composer Lori Laitman.

21st-century operatic roles which have been composed for and have been performed by Ricardo include leading roles in Robert Cuckson’s The Night of Pity, Christopher Park’s Phaedra and Hippolytus, and Alexander Berezowsky’s The Nine Billion Names of God which was performed with Contempo’s eighth blackbird and the Pacifica Quartet.

Regarding Ricardo’s performance of Sophia Gubaidulina’s Perception with Contempo’s eighth blackbird and the Pacifica Quartet, the Chicago Tribune declared him “amazingly precise of musical and verbal gesture”. Other 20th- and 21st-century chamber music Ricardo has performed include Steven Stucky’s Four Poems of A.R. Ammons with the FLUX Quartet, the world premiere of Reinaldo Moya’s Soliquio en las olas with the Arts Symphony Orchestra, and the world premiere of Aaron Dai’s Con furia with the Chelsea Symphony. Additionally, he performed the music of Stockhausen, Cage, Xenakis, and Aperghis as part of the Institute and Festival for Contemporary Performance at Mannes College The New School for Music.

Ricardo was a National Semi-Finalist in the 2012 MET Opera National Council Auditions (MONC) and is a recipient of the Richard F. Gold Career Grant. He also won 3rd Prize in the Gerda Lissner Competition, a Career Grant from the Licia Albanese-Puccini Competition, 1st and Audience Prizes in the NY Lyric Opera Competition, and awards from the Opera Index, Career Bridges, and Connecticut Opera Guild Competitions.