Music by Arthur Sullivan Libretto by W.S. Gilbert The Pirates of Penzance sail to shore and celebrate Frederic’s 21st birthday. Now that he’s an adult, Frederic decides to become a law-abiding citizen. He discovers Mabel and the Wards playing by the seashore. Frederic asks if anyone might like to marry him and Mabel says she would! Suddenly, Ruth and the pirates appear and begin to kidnap the wards in order to turn them into pirates. Mabel’s father, the Major General, enters and convinces the pirates NOT to take away his family because he’s an orphan and would be lonely. The pirates – who are all orphans – give in and cheer him up by making him an honorary pirate. The Major General confesses to Mabel and Frederic that he’s not really an orphan, but is afraid to tell the pirates, and hopes that the Constables will scare them away. Ruth and the Pirate King find Frederic and explain that he’s only had five birthdays because he was born in “leap year.” That means he must is still be a pirate! He rushes off to join the pirates and Mabel gathers the Constables. The pirates hide. Mabel and the wards scamper in and the pirates grab them. The King announces that the wards must now become pirates! The Constables appear and bravely demand that the pirates surrender in the name of the Queen. Being loyal subjects, the pirates immediately surrender. Everyone shakes hands. Mabel and Frederic are reunited. 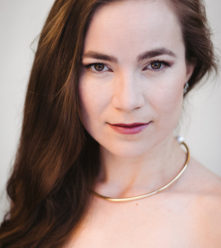 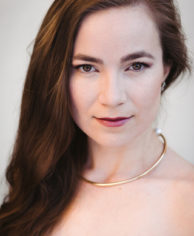 Megan Brunning made her professional debut as the Queen of the Night with Sugar Creek Opera in 2015. Since then, she has performed the role throughout the Midwest and Eastern United States and has even spread “Der Hölle Rache” across the Atlantic and Pacific oceans as a guest soprano with Princess Cruise Line. She makes her European debut as the Queen in February with Hamburger Kammeroper. Other roles include Konstanze, Madame Herz, Norina, Adina, Olympia, and Cunegonde. Her very first full-length role was none other than Mabel in The Pirates of Penzance!

Adam attended Azusa Pacific University on a full football scholarship. After 2 years he decided to leave his scholarship behind and become a music major, and went on to earn his master’s degree in vocal performance. Upon graduating in 2016, Adam had the privilege of working with Sugar Creek Opera in 2016 playing “Connie Rivers” in Grapes of Wrath composed by Ricky Ian Gordon. Since then, he has worked in every medium from the operatic stage, to musical theatre, to film and television. Theatre credits include: “Conrad Birdie” in Bye Bye Birdie with Glendale Centre Theatre, “Gaston” in Beauty and the Beast with Plan B Entertainment, “Anthony” in Sweeney Todd and “Der Notar” (Robert Storch Understudy) in Intermezzo with Pittsburgh Festival Opera, “Joseph” in Joseph and the Amazing Technicolor Dreamcoat, “Captain Phoebus” in Hunchback of Notre Dame, “Gaston” in Beauty and the Beast with 5 Star Theatricals, “Lupe” in Viral: A New Musical at the 2019 Hollywood Fringe Festival. Adam’s notable film and TV credits include: Investigation DIscovery’s Deadly Sins as “George Skiadopolous” (Guest Star), the role of “Aladdin” in The Asylum’s feature film Adventures of Aladdin. and NCIS: Los Angeles as “Marco Ruiz”. Adam is thrilled to return to Sugar Creek Opera as the Pirate King.