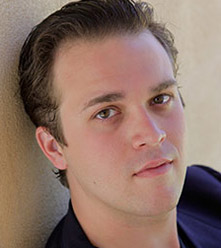 Mr. Levine is a recent graduate of Oberlin Conservatory, where he received his bachelor’s of music degree in voice performance and also a bachelor’s of arts in German studies from Oberlin College. Levine performed often there, including most recently as Laurie in Little Women, Andy in Lost Highway, and Nemorino in L’elisir d’amore. Recently, he also appeared at Aspen Opera Theater and the Chautauqua Voice Institution in New York, where he performed Schumann’s Dichterliebe. While studying at Oberlin in 2003, Levine performed the role of Pinellino in Gianni Schicchi at the Teatro Colon/Oberlin Opera Program. In 2004, he was a member of the Salzburger Sommerakademie Mozarteum.