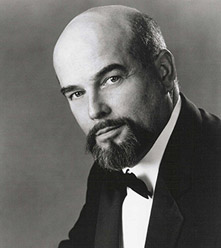 Gaétan Laperrière is described as “a revelation…a great baritone voice and an actor of perfect naturalness” by La Presse of Montréal. He has established himself as one of Canada’s greatest classical artists and a regular favorite at the Canadian Opera Company. He has performed the role of Germont in La traviata with Opéra de Nice, San Francisco Opera, Opera Carolina, Florida Grand Opera, and a Jonathan Miller production at Minnesota Opera, and he also made his New York City Opera debut in this role in Nicholas Muni’s controversial staging of La traviata.

He recently added the title role of Rigoletto and Scarpia in Tosca with acclaimed performances worldwide. The Boston Globe hailed him as an “idealistic Rodrigo,” adding that he was “outstanding for nobility of tone, line and characterization.”

Mr. Laperrière is equally popular in France. He appeared at the Opéra de Paris Bastille in Les dialogues des Carmélites and as Renato in Un ballo in maschera, a role he also performed at the Hong Kong Arts Festival. His Opéra de Marseille debut was in the role of Ottone in L’incoronazione di Poppea. At the Spoleto Festival (Italy), Mr. Laperrière performed Le Directeur in Les Mamelles de Tirésias.

With many noted performances in the United States, the baritone has appeared in leading roles with San Francisco Opera as Sharpless in Madama Butterfly, Washington Opera as Sharpless, Marcello in La bohème, and Athanael in Thais; Houston Grand Opera as Sharpless and Marcello; Baltimore Opera as Zurga in Les Pêcheurs de Perles; and Santa Fe Opera as Marcello. The baritone made his Carnegie Hall debut as Valdeburgo in a concert performance of Bellini’s La straniera with the Opera Orchestra of New York.