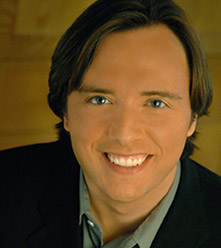 Daniel Shirley is emerging as an audience favorite known for his wide range of tenor characterizations on the operatic and concert stages. As a 2010-11 and 2011-12 resident young artist with Florida Grand Opera, he performed Prunier in La Rondine, Tybalt in Roméo et Juliette (covering Romeo), and covered Don Ottavio in Don Giovanni. Of his recent performance as Tybalt, it was said that “his pure and solid tone indicated that he might have had the equipment to be effective in the title role.” As a 2009 and 2011 apprentice artist with Santa Fe Opera, he covered Gualtiero in Griselda and Don Ottavio in Don Giovanni. Upcoming engagements include his debut with Madison Opera as Acis in Acis and Galatea, a return to Chicago’s Music of the Baroque as tenor soloist in Israel in Egypt, tenor soloist in Jonathan Willcocks’ A Great and Glorious Victory at Carnegie Hall, performs Will Tweedy in Cold Sassy Tree with Sugar Creek, and will cover the roles of Peter Quint and Prologue in The Turn of the Screw with New York City Opera.

Mr. Shirley was recently invited by Maestro Frédéric Chaslin, composer and Chief Conductor of the Santa Fe Opera, to record the role of Edgar in his new opera Wuthering Heights with the orchestra of the Palau de les Arts Reina Sofia in Valencia. Additional performances have included Edgardo in Lucia di Lammermoor with Arbor Opera Theater, Sam Polk in Susannah and Larry/Matt in The Face on the Barroom Floor at Central City Opera, where he served as a 2008 Bonfils-Stanton Foundation Apprentice Artist, as well as various engagements with Mississippi Opera and Opera Memphis as an Artist-in-Residence.

Other roles in Daniel’s repertoire include Count Almaviva in Il barbiere di Siviglia, Nadir in Les pecheurs de perles, Nemorino in L’Elisir d’Amore, Tamino in Die Zauberflöte, Fenton in Falstaff, Ferrando in Cosí fan tutte, Nanki Poo in The Mikado, and the title role in Candide.

A passionate concert artist, Shirley has been lauded for his interpretations of the major works of the sacred canon. He debuted with the Indianapolis Symphony Orchestra during December 2009 as soloist in Haydn’s St. Nicholas Mass. He has sung Messiah with the Evansville Philharmonic Orchestra and with choral and symphonic organizations throughout the Midwest, Elijah with the Lafayette Bach Singers, the Matthäus-Passion (arias) and Mozart Mass in c minor with the Bloomington Chamber Singers, Bach Mass in b minor with the Columbus, Indiana Philharmonic, and Haydn Creation as a guest artist of St. Joseph College in Indiana. He also joined oboist Elizabeth Robertson for the Vaughan Williams Ten Blake Songs on her album Oboe Serenade.

Shirley is the recipient of awards from the Sullivan Foundation, Anna Sosenko Trust, the National Society of Arts and Letters, Central City Opera, the Orpheus National Vocal Competition, Chautauqua Opera, and the Dayton Opera Guild. His voice instructors have included tenor Jason Ferrante and mezzo-soprano Patricia Stiles of the Indiana University Jacobs School of Music, where he obtained a Master of Music. While there, he sang a variety of roles as well as two significant premieres: Dino in the collegiate premiere of William Bolcom’s A Wedding, and Joe Crowell in the world premiere of Ned Rorem’s Our Town. With the university’s Pro Arte ensemble, he was honored to sing in the world premiere of John Harbison’s A Clear Midnight. He holds a Bachelor of Music from the Vanderbilt University Blair School of Music, where he appeared as the Lover in Menotti’s Amelia Goes to the Ball. He and his wife, soprano Caitlin Shirley, reside in Chicago.