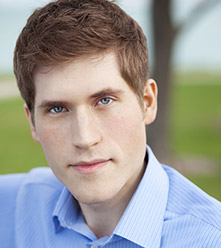 Tenor Jeremy Ayres Fisher spent the summer of 2012 as an Apprentice Artist with Opera Saratoga, where he was seen as Borsa/Rigoletto and Fireball Snedeker/The Mighty Casey. He conducted his graduate studies at Northwestern University, where he sang Eisenstein/Die Fledermaus, as well as Des Grieux and Lensky in selections from Manon and Eugene Onegin. Mr. Fisher received his Bachelor of Music from the University of Illinois at Urbana-Champaign, singing roles including Albert/Albert Herring, Lt. Cable/South Pacific, and Benvolio/Roméo et Juliette. This summer, he will be returning to Opera Saratoga to sing Arturo/Lucia di Lammermoor.