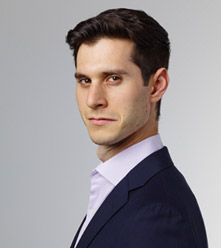 Bass-Baritone Joshua Arky’s 2017-2018 season began with a performance of Don Alfonso in Così fan tutte with Opera
San José. As a Herndon Foundation Emerging Artist with Virginia Opera, Joshua performed Jake Wallace and covered Ashby in La fanciulla del West, and he sang in a touring production of The Billy Goats Gruff. In the summer of 2018, he will perform Don Basilio in Il barbiere di Siviglia with Sugar Creek Opera. Also in the summer of 2018, Joshua will collaborate with pianist Ines Irawati on a project that explores contemporary society’s relationship to food and agriculture.

Joshua’s 2016-2017 season began with a return to Opéra Louisiane to sing Alidoro in an English version of La Cenerentola. He then joined Palm Beach Opera as an Apprentice Artist, where he sang the Sergeant of Police in a family performance of The Pirates of Penzance. He also joined the Greenwich Choral Society in concert, where he was
featured as a soloist in Puccini’s Messa di Requiem. His season finished with performances of Figaro in Le nozze di
Figaro with Point Loma Opera Theatre, and Hidraot in Gluck’s Armide with OperaNEO.

Other operatic highlights include the Sergeant of Police in The Pirates of Penzance with Opéra Louisiane; Il Conte di
Walter in Luisa Miller, Colline in La bohème, and Sarastro in Die Zauberflöte, all with the Manhattan School of Music; the Captain of the Inquisition in Man of La Mancha, Merlin in Boismortier’s Don Quixote and the Duchess, and Dottore Grenvil in La traviata, all with Central City Opera; Collatinus in The Rape of Lucretia with the Green Mountain Opera Festival; and Zuniga in Carmen with the Aspen Opera Theater Center.

In concert, Joshua has performed as a soloist in Beethoven’s Symphony No. 9 with the Binghamton Philharmonic,
Mozart’s Requiem with Hunter College, and Händel’s Messiah with Columbia University.