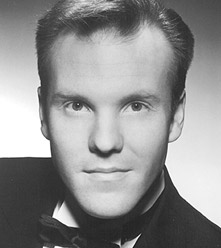 One reviewer described Mr. Chellis as “a tenor of considerable softness and beauty of tone with a surprising reserve of power.”  The Washington Post wrote “A mellow tenor voice floated out from the stage:’Comfort Ye, Comfort Ye My People’, and you could feel the audience doing just that.” Mr. Chellis is regular performer with New York City Opera in such roles as Tamino in The Magic Flute, Don Ottavio in Don Giovanni, Nanki-Poo in The Mikado and Cascada in The Merry Widow in the Live from Lincoln Center telecast on PBS.   International credits include the role of the Duke in Rigoletto with Teatro Colon de Bogota (Colombia), Ernesto inDon Pasquale with Calgary Opera and Edmonton Opera and Ramiro in La Cenerentola with Opera de Quebec. Mr. Chellis has also performed Pedrillo in Washington Opera and Andres in Wozzeck at Dallas Opera.