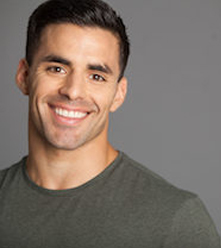 Adam attended Azusa Pacific University on a full football scholarship. After 2 years he decided to leave his scholarship behind and become a music major, and went on to earn his master’s degree in vocal performance. Upon graduating in 2016, Adam had the privilege of working with Sugar Creek Opera in 2016 playing “Connie Rivers” in Grapes of Wrath composed by Ricky Ian Gordon. Since then, he has worked in every medium from the operatic stage, to musical theatre, to film and television. Theatre credits include: “Conrad Birdie” in Bye Bye Birdie with Glendale Centre Theatre, “Gaston” in Beauty and the Beast with Plan B Entertainment, “Anthony” in Sweeney Todd and “Der Notar” (Robert Storch Understudy) in Intermezzo with Pittsburgh Festival Opera, “Joseph” in Joseph and the Amazing Technicolor Dreamcoat, “Captain Phoebus” in Hunchback of Notre Dame, “Gaston” in Beauty and the Beast with 5 Star Theatricals, “Lupe” in Viral: A New Musical at the 2019 Hollywood Fringe Festival. Adam’s notable film and TV credits include: Investigation DIscovery’s Deadly Sins as “George Skiadopolous” (Guest Star), the role of “Aladdin” in The Asylum’s feature film Adventures of Aladdin. and NCIS: Los Angeles as “Marco Ruiz”. Adam is thrilled to return to Sugar Creek Opera as the Pirate King.