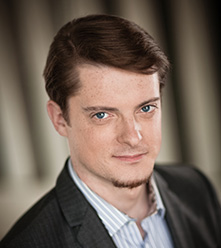 Having been praised for his “exceptionally expressive instrument” (Bachtrack) and “clear, ringing forthright sound (The Montreal Gazette), Cairan Ryan has embarked on a promising young career. He was born in Lier, Belgium, emigrated to Calgary, AB, and recently completed his 2-year tenure at the Atelier Lyrique de L’Opéra de Montréal. In the 2014-15 Season, he sang Papageno in The Magic Flute at Opera Lyra Ottawa, appeared in the 2014 Jeunes Ambassadeurs Lyriques Gala, was soloist for the Choeur Polyphonique de Montreal’s Messiah, soloist for University of Ottawa’s Ein Deutsches Requiem, and The Church of St. Andrew and St. Paul’s Church’s B Minor Mass, under the baton of Jordan de Souza. In July 2015, he appeared as soloist at the Festival de Lanaudière, in Bruckner’s Mass No. 3 in F minor, with the Orchestre Metropolitain de Montreal, with Yannick Nézét-Seguin at the podium. He made his Against the Grain Ensemble debut this summer at the Banff Centre, singing Don Alfonso in Così fan Tutte, and sang Il Conte Almaviva in Le Nozze di Figaro at Highlands Opera Studio. The 2015-16 season saw him make debuts with the Viva Voce ensemble in Montreal, singing Bach Cantata 63, the Vero Beach Opera as Falke in Die Fledermaus;  reprise his role as Don Alfonso in Against the Grain Theatre’s critically acclaimed production of A Little too Cozy/Così fan Tutte, and will make his Sugar Creek Opera debut as Tom Joad in Ricky Ian Gordon’s The Grapes of Wrath. He will make his debut with the Netherlands Radio Philharmonic Orchestra at Het Concertgebouw as Der Notar in Richard Strauss’ Intermezzo in 2017.  The 2013-14 season saw Cairan sing Marcello in Jeunesses Musicales Canada’s production of La Bohème, and The Father in Opera de Montreal/Atelier Lyrique’s production of Hänsel und Gretel. Cairanmade his French debut at Choregiesd’Orange in May 2014. He attended the Tanglewood Institute as a Vocal Fellow of the 2014 Festival Season, and made his Boston Symphony Orchestra debut as the Doctor/Inquisitor II in Bernstein’s Candide, under the baton of Bramwell Tovey. Cairan is a winner of the Metropolitan Opera National Council Auditions at the District Level (Kansas City District), an inaugural Koerner Foundation Scholarship recipient, was supported by the Schulich Scholarship and the Noel E. Spinelliprize in Music at McGill University. He holds degrees from The University of Victoria School of Music, The Guildhall School of Music and Drama, and the McGill University Schulich School of Music.