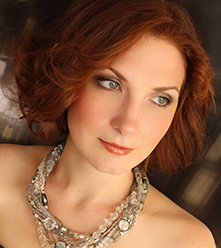 Hailed as possessing a voice of “spell-binding power and intensity” (The Register-Guard), mezzo-soprano Julie Miller has appeared as a soloist with many orchestras and in many major concert halls across the country. Most recently, Ms. Miller made her debut with the Lyric Opera of Chicago as Emilia in Otello, and was also seen there as Annina (La Traviata), Ida (Die Fledermaus) and Krystina (The Passenger). Some of her orchestral appearances include performances with the the Kalamazoo Symphony Orchestra, the Oregon Mozart Players and the Grant Park Music Festival. Ms. Miller has also been a featured soloist at Carnegie Hall in the world premiere of Ryan Carter’s Doot and at the Ravinia Festival in a performance of Bernstein’s Songfest. In the coming months, she looks forward to appearing as the Mezzo Soloist in Schubert’s Mass in A flat with the Illinois Philharmonic Orchestra, Ma Joad (Grapes of Wrath) with Sugar Creek Opera and Baroness Pannonica de Koenigswarter  (Yardbird) with Madison Opera.

Ms. Miller is the recipient of the the Jerome and Elaine Nerenberg Foundation Scholarship and the Rose McGilvray Grundman Award (American Opera Society of Chicago), the Richard F. Gold Career Grant (Shoshana Foundation) and the Edith Newfield Scholarship Award (Musicians Club of Women). She recently completed her second year in the Patrick G. and Shirley W. Ryan Opera Center at Lyric Opera of Chicago, and prior to that she had the honor to complete her Master’s Degree as a member of the inaugural class of Dawn Upshaw’s Graduate Program in Vocal Arts at the Bard College Conservatory of Music.