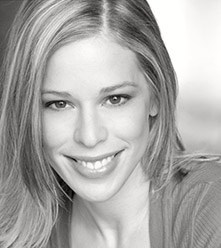 With New York City Opera, Stephanie has performed in A Little Night Music, Rigoletto, and La Traviata. On her performance in Don Giovanni at Opera Pacific, ClassicalVoice.org wrote that Ms. Woodling “portrayed Elvira with a creamy, incisive voice that was both exciting (in ‘Mi tradí’) and moving.”

Now in her third season with Deutsche Oper am Rhein in Dusseldorf, Germany, this season she sings Hänsel, Die zweite Dame, Siébel, and Annio. Last season she sang the roles of Dorabella, Wellgunde (Das Rheingold), Tessa (The Gondoliers), and Antonia (Tiefland) and debuted with the company in 2004 as Die zweite Magd in its new production of Elektra.

Previously a young artist with Opera Pacific, she appeared in a number of roles, most notably Donna Elvira in Don Giovanni, which critics described as providing “an intellectual burst of animation into the proceedings, giving a charming, brash, and thorough reading.” Other Opera Pacific credits include Meg in Little Women, Flora, Mercedes in Carmen, Jade Boucher in Dead Man Walking, and Die zweite Dame in The Magic Flute. Recent operatic debuts include Lyric Opera of Kansas City as Stephano in Roméo et Juliette, OK Mozart Festival as Ciesca in Gianni Schicchi, and Mrs. Segstrom in Los Angeles Opera’s production of A Little Night Music, and with Caramoor as Flora.