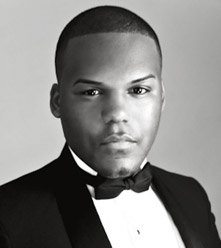 Hailed as “a voice to remember” while performing at The Rockwall Music Festival, LaMarcus Miller has been an active young artist, appearing in a number of leading and supporting operatic roles. Most recently Mr. Miller made his Kennedy Center debut singing the leading role of USMC Philip in the new Opera Fallujah by Tobin Stokes & Heather Raffo. “In the opera Fallujah LaMarcus Miller’s sensitive and vulnerable portrayal is riveting. His vocal command will have you hanging onto every note”- DCMTA. Mr. Miller is an alumna of the 2012 Danis Wilson Apprentice Program for which he was cast as Prince Yamadori in Madama Butterfly and Marco in Gianni Schicchi.