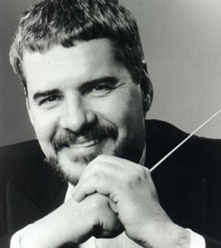 Long recognized as one of the world’s leading instrumentalists, Ransom Wilson is equally esteemed as an outstanding conductor of orchestral and operatic repertoire. He is music director and principal conductor of Solisti New York Orchestra, which he founded in 1981, artistic director of the OK Mozart International Festival, and artistic director of the Mozart Festival-at-Sea on the M.S. Westerdam. Mr. Wilson has accompanied many internationally renowned artists from the podium, including Itzhak Perlman, Frederica von Stade, Nadja SalernoSonnenberg, Joshua Bell, Garrick Ohlsson, Jeffrey Kahane and Robin Sutherland. An esteemed operatic conductor, Wilson has conducted new and highly acclaimed productions of Mozart’s Magic Flute with the Tulsa and Omaha Operas and the American stage premiere of Il Re Pastore, also by Mozart, with the Glimmerglass Opera. Other operatic appearances have included re-engagements at Opera Omaha, where he conducted Beethoven’s Fidelio and the American stage premiere of Rossini’s Ermione, and at Glimmerglass where he led performances of Così fan tutte, and appearances with the Minnesota Opera to conduct Rossini’s Armida and Verdi’s Trovatore.